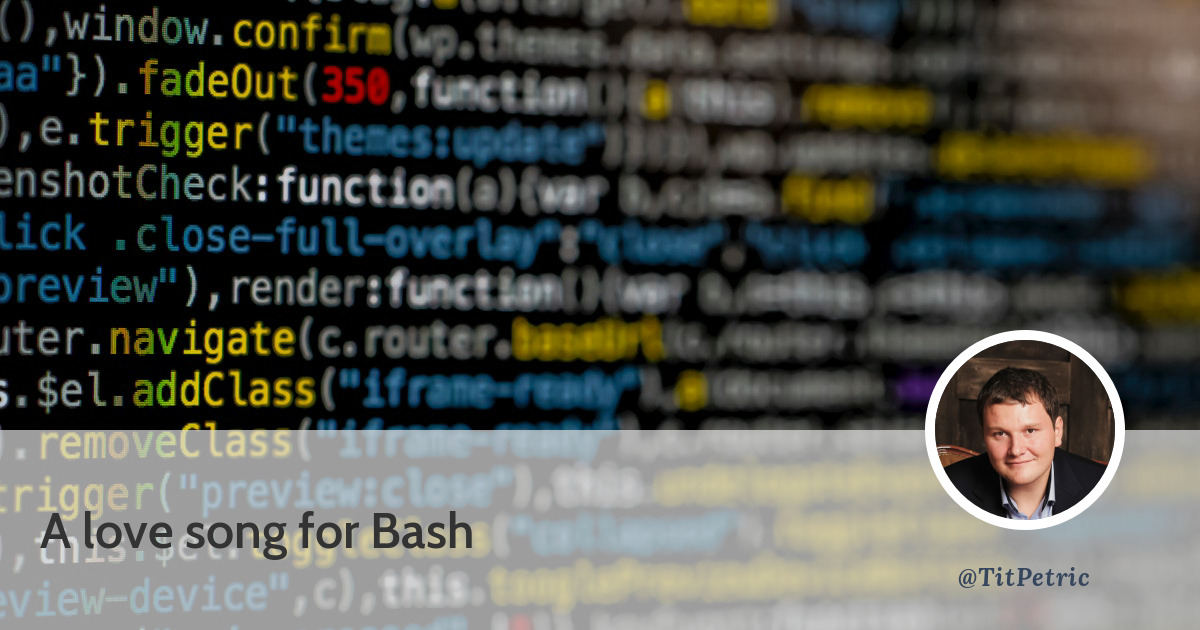 A love song for Bash

There isn’t a day where I don’t see some kind of DevOps article that advocates some sort of higher order programming language for performing shell tasks, most recently one that uses Python to issue a POST request on a Discord Webhook API, when ever somebody logs into your server.

The article, A SSH monitoring platform with Discord, makes this assumption that somehow issuing a HTTP API request with curl and bash is something that’s somehow worse than pulling several 10s of MBs of dependencies for a programming language you might not even know or use otherwise.

To give some figures for space efficiency here:

But why particularly don’t people use bash? The steps for this are easy:

There’s not much you need to know in bash in order to do this. As it’s easier to work with files, all we need to do is read in a file with bash, and replace some tokens afterwards. Let’s create this ssh-login.json file here:

As you can see from the JSON, all we need to do is replace $HOSTNAME and $USER. Let’s start with reading the file. As somebody who is familiar with bash, you might think that using cat is a good way to read a file, but we can use the built-in:

If you resorted to cat, bash would spawn a sub-process. This way it’s more efficient and it will read the file directly into the variable. With this, we can move towards replacements.

We need to quote the variable when printing it, so it preserves white space in the output. Running the above gives us the following payload:

Note: The replacements shown are replacing only a single occurence. If you want to replace them all, you can add another / after the first slash:

Issue a request to a discord webhook

When you have contents, issuing the request is brief to say the least:

In order to run it from sshrc, we’ll need to read the JSON from the correct path. There are two ways to get the full script path: readlink -f $0 or realpath -s $0, depending on which exists on your system (readlink is more common). The full script comes up to:

To add it to your ssh, issue the following commands (as root, or under sudo su -):

When you next make a SSH login to your server, it will trigger a webhook notification on Discord. Without pyhon, and most likely, without any additional software, as most hosts come with bash and curl already installed.

When you think about what people usually do on servers, you might remember all those times where you were tailing some log files and filtering it for relevant information. Knowing how to transform your data so that it fits your use cases is great, and for that you do need to handle at least the basic shell commands that allow you to do that:

Let’s give a few examples that will cover some of these:

Of course, the snippet can be improved with better knowledge of the docker and sort commands:

Thanks to Sergey Fedchenko for keeping me honest.

I have some servers which are used to host static content. Partially, some of this content is generated into a cache folder based on active use, and deleted often to keep some 10GB free on the servers. The clean up script shows an approach how to do that:

There are a few notable parts of this script:

Now, bash wasn’t really built for math. It doesn’t really have a standard library which would give you math fuctions, but it’s usable for simple counters like the example uses.

For those using crontab (and not something else), you might have a need to run scripts more often than once per minute. You can basically use bash to measure how much the first command run has taken, and then sleep for a required number of seconds before running the command again.

Now, bash doesn’t have a standard library that would give you date/time formatting functions. What it has is access to the filesystem and the ability to execute commands that can produce that. Since we’re trying to be efficient, this means that we would need to get the system time from /proc.

The first idea is to use /proc/uptime.

But, after running the test, we realize that bash, while not great in with math to begin with, doesn’t have any concept of floating point math:

But we can filter out the decimal point and fraction with sed.

That’s just about the ugliest piece of bash code you can put together. If things are looking like that, there’s a good chance that this can be cleaned up and optimized. And sure enough, it can be:

What do you think this prints? Does it print 0 or 3?

What’s amazing (and completely understandable), is that a LOT of people don’t know about this little known bash feature. A poll which I did on twitter, had 80% of people answer incorrectly as to what the above output is, so don’t feel bad if you expected a zero there.

What I ended up using was:

If you’re doing mathematical operations, then bash won’t be the right tool for the job. But if you’re doing plain HTTP API requests, or orchestration, even parallelisation, then bash is a really powerful toolset which you can use. You don’t need to import python, php or node if all you need to do is replace some variables in a JSON payload and send it along to a web service.

The lack of a standard library features one might expect from more general-purpose programming languages is definitely a pitfall in bash. But to be honest, do you really need to do everything with it? No. But should you do everything in your language of choice? Most likely also no. If you can ask yourself “Can I do thing in bash?” the answer most likely is yes. It’s easier to add dependencies than cut them out, so the next time when you’re scripting something, give bash a chance. If it runs under in crontab, most likely it can be done in bash.