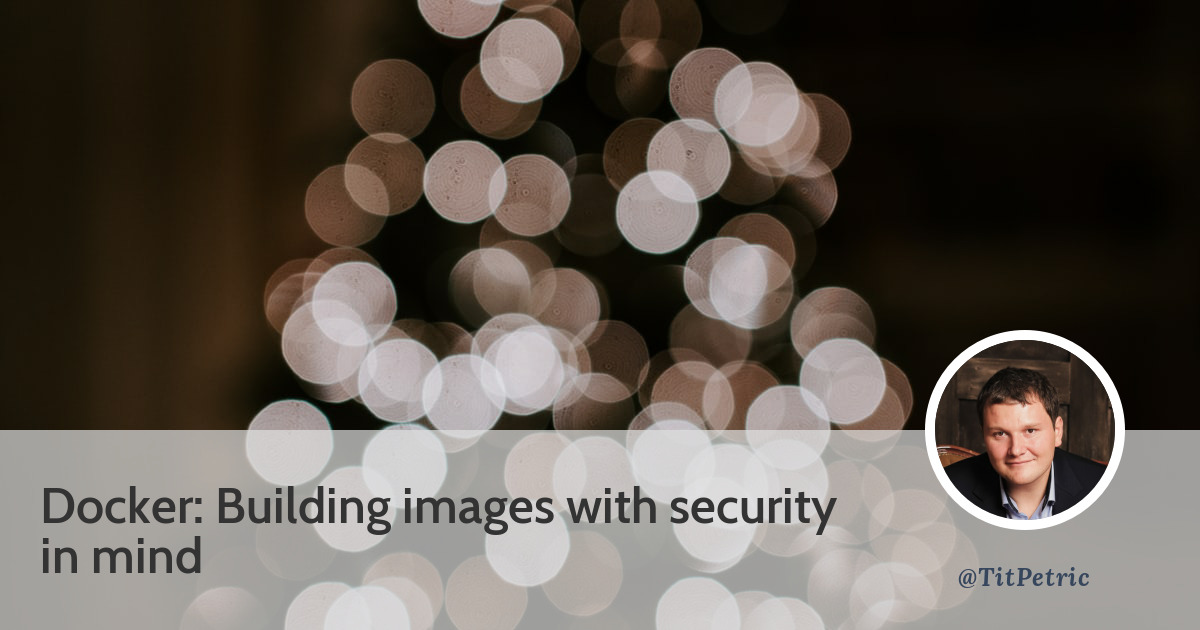 When it comes to running our microservices in production, we need to build docker images. Security is unfortunately an afterthought, so let’s try to figure out what we can do to increase security so it’s better than most of the stuff out there.

We will start by adding Makefile rules to enable us to build and push docker images.

There’s nothing magical about this target, it’s the same principle which we are already using for our code generation, and service building. To use it, you can just run make docker to build the images, and make push to push the images to docker hub or your registry, based on the IMAGE_PREFIX value.

Let’s create our basic service Dockerfile under docker/serve/Dockerfile. We will start with some reasonable defaults and then try to improve the security of the built images even further.

We are actually building a fully featured distro image on alpine here. We add the few required packages that actually enable our service to function on some common baseline:

The tzdata package is required not only for setting a default timezone for the Docker image, but to format times based on timezone data in Go:

The attack surface here requires that a person should first exploit our service, and then exploit the running kernel to escalate privileges from www-data to root, and then could use apk to install packages that could either do whatever inside the container, or attempt to break out of docker to own your host.

Can we improve this further? I believe we can. Two things come to mind:

Security implications of our docker image

In order to figure out all the files that are bundled in the container, we can use docker to list the files built in the image. Since the container has find, this can be done with:

Inspecting the file, we can list the root folders to figure out which are safe and unsafe:

We can immediately ignore the /sys and /proc folders, since these are coming from our docker container environment and don’t include executable files. We could just inspect the executables found in the PATH environment:

Since all the executable files are contained in either the bin or sbin folders, we can list them particularly just by looking for bin/ with grep:

Now, the simpler attack surface for privilege escalation needs something that’s called a setuid bit set on the executable. This means that an unprivileged user like www-data can run something as root. You can inspect the binaries by invoking find with -perm -4000 as the parameter. On our host, we’ll end up a list like this:

Alpine doesn’t come with any setuid executables (at least with out current package selection), which means the only way to exploit the running container would be to attack the kernel. From here, the attack surface can still theoretically be limited to the running container, meaning an attacker could run anything in the container with elevated root privileges. The other way would be to break out of the cgroup of the running process, and effectively attack the host. We can defend against the first scenario, just by cleaning up the executables in the built image. Let’s just do that:

By cleaning these up, we can be sure that the attacker can’t just run /bin/busybox under a privileged process and end up with a shell to your container. There are other ways to improve the security of your container, and ultimately the security issue might be in your app and the libraries that are compiled in, so we can’t be sure that there is absolutely no way to exploit it, but at least we came pretty damn close.

There are two notable projects that deal with container security which you might want to look at.

With Clair, the intent of the project is to continously scan your images for newly published vulnerabilities. It will not solve them, but it will let you know if you need to upgrade or remove some of the packages that are contained in your container.

With docker-slim, the project uses static analysis for doing what we did above by hand. We know that our application doesn’t rely on anything under bin/ or sbin/ folders, so we could safely delete them without impacting our service. Docker slim goes further than that, and not only removes binaries, but rebuilds the complete image without referencing the base image, and deleting everything that may be unused, possibly even stripping debug symbols from your app, and ending up with a tiny image which goal is both optimized for size and security. With it, your final build image would be similar to what you would get if you started with FROM scratch.

Another approach would be to use a multi stage Dockerfile, which first installs everything we need in a builder image, and then copies the required files into an image built from scratch. What we would probablly need is just the /etc folder, or a subset of it. The exercise is left to the reader.