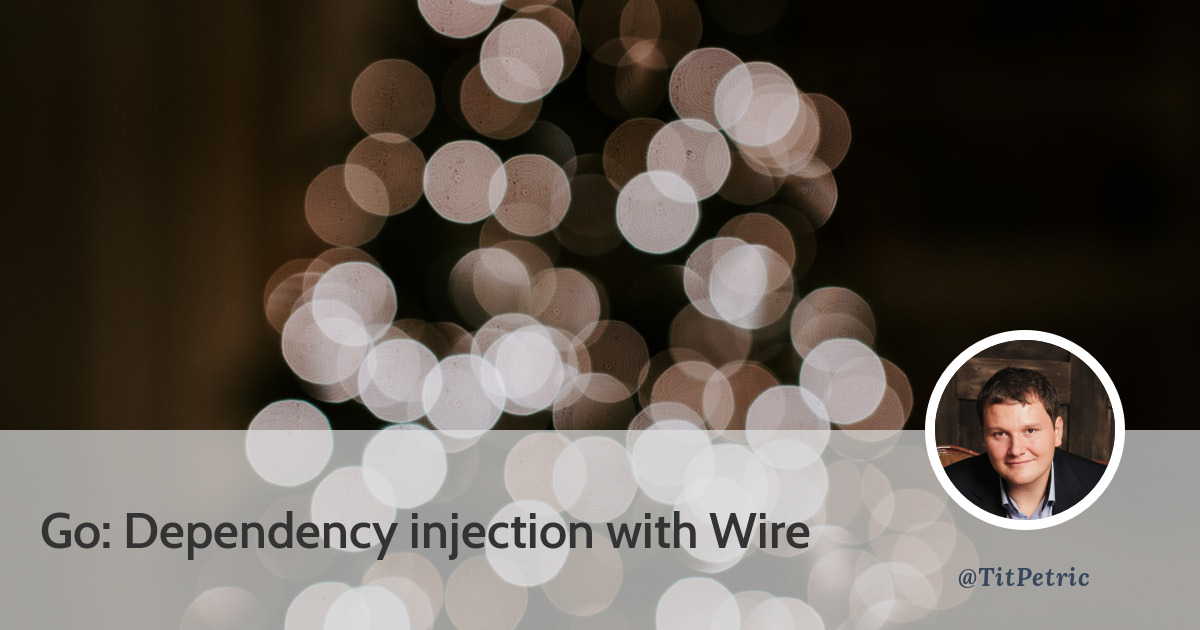 Our microservices ultimately need at least a database connection in order to query and store data in a MySQL database. We need to pass this object, possibly from the main() function, to our service implementation.

I have learned through trial and error, that “Dependency Injection” is a term which manages to evoke a strong emotional response in gophers. As I’ve said before, all that the term represents in Go is “a way to pass stuff into our handlers”, while it means a lot of different things to people familiar with the concept from other programming languages.

The most trivial way of dependency injection would be to declare function arguments in our server constructor. For example, if we would need a *sqlx.DB, we would declare a constructor like:

It would be up to the caller to implement the correct argument list to fill the required dependencies for the constructor. When dealing with a possible large scale RPC scaffolding project, like we are, we are faced with a few pitfalls of this approach.

The proto file definition for our service doesn’t provide any way to set up a list of dependencies which are required for our service. Obviously the service block in the proto file only declared the interface for our RPCs, but it has absolutely no standard way to reference Go structures (like *sqlx.DB).

The obvious second pitfall is that our code generators would become exponentially more complex with each added service, and custom service dependencies. While we can asume that we use a single database connection for a service, we can’t really know how unique the dependencies for any given service will be.

Ideally we need a way where we can add new dependencies, and not have to refactor every service we have written until then to keep some idea of a consistent Go API.

In addition to the standard Go way to pass parameters to constructors, there are two pattern to dependency injection in the wild. Each one of them has a set of constraints, which basically boil down to it’s effect on when an issue is detected.

Runtime dependency injections, like codegangsta/inject resort to using reflection from the internal reflect package, to inspect objects or functions written in the Go way above, and invoke functions that provide results for individual parameters. As an example, injection would look like:

The idea is, that you declare an object which holds either concrete values or functions that return values of a required type and then figure out with reflection which values should be passed to server.New, hidden behind injector.Invoke() call.

Obviously this has a few issues like error handling (it’s likely that a database connection can produce a timeout error on connection, we can’t handle it here and thus we can only resort to a panic call), and ultimately a runtime error when a value or construction for a particular type is not defined.

Runtime errors are an unwanted side effect when reflection is used in such a way. The structure of the application doesn’t have any kind of type hinting that would suggest to the go compiler that a dependency isn’t satisfied, and possibly dangerous errors could bleed into production because of this.

Google has also realized this problem, and because of it has designed their own DI framework, google/wire. The intent of the project is to provide a compile-time dependency injection, which could error out in case a dependency isn’t declared or provided at build time.

Wire relies on code generation and reflection to analyze the source code and produce injection code that is equal to what you would have to write, in order to fill the dependencies required by your service.

The concepts introduced by Wire are called:

An injector is any function that returns a particular type, like in our case, the database connection handle, *sqlx.DB, or in the case of our currently only RPC client, a stats.StatsService interface. Each of these can be returned with an error, or without one. If returned with an error, wire will generate the supporting code for error checking and bubble up the error from the generated Injector.

Let’s create db/connect.go with our provider for a database connection:

In this case, the db.Connect function is a provider for our database connection. As for our clients, we will resort to code generation again, to produce another ProviderSet. Add the following to your Makefile under your templates: target (the main one):

And then create templates/client_wire.go.sh with the following contents:

For each service we have declared, a new provider is registered in wire.NewSet() and made available over client.Inject. In our current case, this file is generated:

As we would add a new service, the import for the service would be added, and a new provider would be added to the wire.NewSet call. As such, new services immediately become available to all existing services, all we need is to add the appropriate type into the Server{} structure and it will get filled with the generated injector.

As these injectors are stand-alone, we can create a global inject package, which binds them together in a single ProviderSet (inject/inject.go):

And from here on we can move towards generating the Injector with wire.

We have scaffolded all the requirements for wire, to be able to analyze the code and generate the injector that will fill out dependencies for our services. First, we need to install wire in our build/Dockerfile:

Rebuild and push the dockerfile to your registry, and you can start using wire from Drone. As wire will create our new service constructor, remove New() from templates/server_server.go.tpl and add *sqlx.DB as a dependency by declaring it inside the Server{} struct:

This will ensure that there isn’t a conflict between the old constructor, and the new constructor created with Wire. We will now create an injector definition in our service, under server/stats/wire.go, by using a template for our code generator (templates/server_wire.go.tpl):

As you see from the template, the file begins with //+build wireinject, which excludes this file from our build process. Wire uses this file to load and analyze the source files that it references, to figure out which dependencies are defined.

Make sure that you invoke the following line in your Makefile templates.% target to generate the required wire.go file for each existing service:

After we build the docker image for our build environment, all we need to do is run wire ./... on our code base. We will add this to our build steps in drone:

And if we inspect the file itself, we can see it’s written just as well if we would write it by hand. Each of the required dependencies by our server is filled out, and the others are omitted. This in our case means that we get our DB handle, but as we aren’t using any RPC clients they are omitted until we add them to the Server struct.

The providers that return errors also have error handling in this function. As the errors are preserved and returned, we can use them outside of our service constructor - in our case, we issue a log.Fatal in main() and exit.

With wire set up, adding a new dependency into our service is trivial, we just need to add a new field into the Server{} struct. In case we want to omit a field from being filled out with wire, we can tag it with wire:"-". We future proofed our service layer in such a way that we can add new dependencies into the main inject package, and they will be picked up by all services at the same time.

There are some caveats with wire, notably that you can’t pass a wire.ProviderSet as the argument for an Injector. This is because wire relies on parsing the AST of your packages source files in order to generate provider invocations. In the sense of a public API which could be imported from a third party package, wire has no way to know on the code generation step, which providers are defined inside a ProviderSet.

There are probablly other notable exceptions where wire might fail. In the sense of something you can pick up and randomly throw at an object, it’s definitely not as robust as writing individual server constructors by hand.

As a possibility, instead of a generic ProviderSet, we could have a concrete Providers interface, that must satisfy all the fields declared on Server{}. The interface, as it is a concrete type, can cross package boundaries and the individual provider implementations (or a singleton of them) could be provided as an external package. Currently wire doesn’t really take the concept into it’s logical conclusion, and is probablly too complex for a DI framework. But, as we don’t really have a better option and won’t start to write our own, this is what we have and we can work with it.