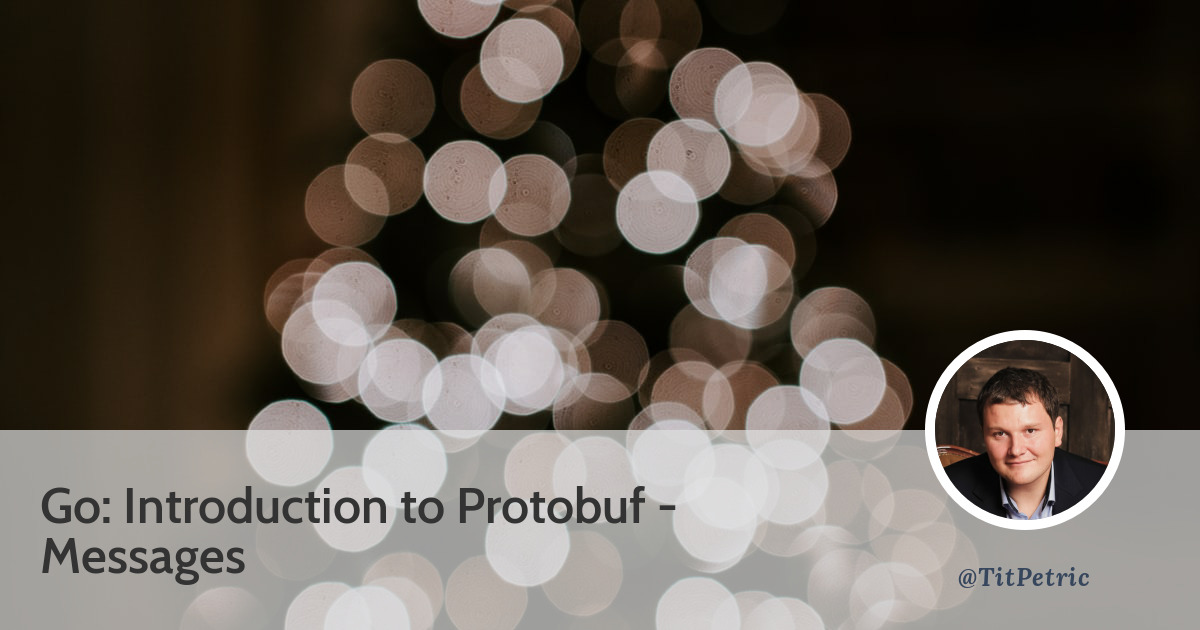 In it’s most basic ways, protocol buffers or protobufs are an approach to serialize structured data with minimal overhead. They require that the data structures be known and compatible between the client and server, unlike JSON where the structure itself is part of the encoding.

The most basic protobuf message definition would look something like this:

The above message structure specifies the field names, types, and it’s order in the encoded binary structure. Managing the structure has a few requirements that mean different things, if the structures are used as protobufs, or as JSON encoded data.

For example, this is the protoc generated code for this message:

In the development process, managing the protobuf messages in a forward compatible way, there are some rules to follow:

So, basically, if you’re relying on changing the protobuf message definitions during your development process, you’ll need to keep the client(s) up to date with the server. This is especially important later, if you use the protobuf API with mobile clients (Android and iPhone apps), since making breaking changes to the API is going to hurt you there. Adding new fields or deleting old fields is the safest way to make changes to the API, as the protobufs definitions stay compatible.

In this series of articles, I’m going to build out a real world microservice, that tracks and aggregates view data for a number of services. It doesn’t need authentication and is in it’s definition a true microservice, as it will only need a single API endpoint.

We will create our stats microservice, by creating a rpc/stats/stats.proto file to begin with.

Here a proto3 version is declared. The important parts are the go_package option: with this an import path is defined for our service, which is useful if another service wants to import and use the message definitions here. Reusability is a protobuf built-in feature.

Since we don’t want to do things half-way, we’re going to approach our microservice with a CI-first approach. Using Drone CI is a great option for using a CI from the beginning, as it’s drone/drone-cli doesn’t need a CI service set up, and you can just run the CI steps locally by running drone exec.

In order to set up out microservice build framework, we need:

Installing drone-cli is very simple. You can run the following if you’re on an amd64 linux host, otherwise just visit the drone/drone-cli releases page and pull the version relevant for you and unpack it into /usr/local/bin or your common executable path.

Drone CI works by running CI steps you declare in .drone.yml in your provided Docker environment. For our build environment, I’ve created docker/build/, and inside a Dockerfile and a Makefile to assist with building and publishing the build image required for our case:

And the Makefile, implementing make && make push to quickly build and push our image to the docker registry. The image is published under titpetric/microservice-build, but I suggest you manage your own image here.

It’s very easy to run drone exec, but our requirements will grow over time and the Drone CI steps will become more complex and harder to manage. Using a Makefile enables us to add more complex targets which we will run from Drone with time. Currently we can start with a minimal Makefile which just wraps a call to drone exec:

This very simple Makefile means that we’ll be able to build our project with Drone CI at any time just by running make. We will extend it over time to support new requirements, but for now we’ll just make sure it’s available to us.

With this, we can define our initial .drone.yml file that will build our Protobuf struct definitions, as well as perform some maintenance on our codebase:

The housekeeping done is for our go.mod/go.sum files, as well as running go fmt on our codebase.

The first step defined under the commands: is our protoc command that will generate the Go definitions for our declared messages. In the folder where our stats.proto file lives, a stats.pb.go file will be created, with structures for each declared message {}.

So, what we managed to achieve here:

From here on out, we will move towards implementing a RPC service.