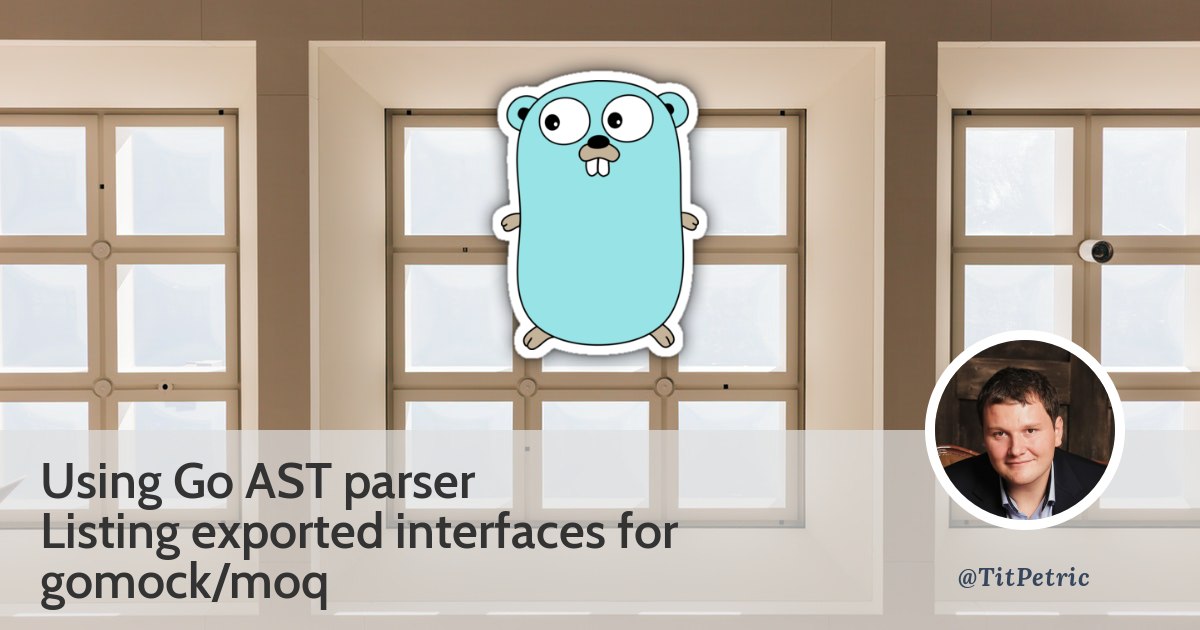 Testing is an important part of software development. Specifically, mocking is a common approach where the developer implements an interface that “mocks” the behaviour of a concrete implementation. Depending on the complexity of the mocked objects, there are many ways you can approach this problem.

Notably, if you have a simple program, your mocks can be simple as well. Let’s assume that you have an interface which implements a key-value store API. Actually implementing that in Go code is very simple.

The KeyValueDatabaseMock implemented here, should behave as good as a concrete implementation of a real production backing service. Obviously such key value stores aren’t really complex enough to be difficult to mock, but a larger amount of interfaces or more complex ones might be more difficult. Can you imagine mocking a fully-featured SQL client? Me neither.

Go has an official mocking framework called GoMock. It can be installed like this:

Many of you, and a few people I know personally, quickly resort to some level of bash-fu, or regular expressions to parse the code and retrieve a list of interfaces. And it works well, for the most part. This was a problematic one liner that ended up in my inbox:

Of course, when you realize that declarations can be nested inside a type block, the script doesn’t really end up giving you the results you wanted. Nothing a little more of the same doesn’t fix, right?

That’s a whole lot better. Except it doesn’t work on your Macbook, because sed there is a different breed (but you can install gnu-sed). Either way, it’s just a time bomb. For the most obvious one, it doesn’t ignore comments, and it may very well be that an interface could be detected within a comment.

AST stands for an “abstract syntax tree” and consists of data structures that represent your go source code after it has been parsed. Individual AST tokens have different meaning, ranging from declarations of consts, structs, interfaces, functions to opcodes like loops, ifs and returns. And, important to our case, we can parse our source code and list all the exported interface definitions.

The few important packages that we need to parse Go source code are go/ast, go/parser and go/token. We want to produce an application that takes any number of *.go files as arguments, parses them, and outputs a list of all exported interfaces, one per line.

Breaking it down, the application traverses it’s arguments with a for loop, and then parses each filename into an AST. If - is added as an argument, we skip that argument. This is there so we can trick go run main.go filename.go not to compile filename.go along with our parser, by running it as go run main.go - filename.go.

We can, if parsing of the go source code is successful, then use this AST for traversal. Traversing the AST is very simple. The ast package already provides an utility function, Inspect, which will pass each AST node to our callback for further inspection. What we are doing is:

At that point, all that needs to be done, is to print the interface name to the standard output. This may be further filtered with things like grep and xargs, in order to produce a CSV for gomock or moq.

A short oneliner to produce the CSV argument for gomock or moq, excluding certain interfaces:

Of course, you may pass the options to the generators individually, so you may generate one file per interface instead of a larger file containing all the mocks. It depends on you, and now you finally have a reliable way of doing that.

The full code is available on github. If you liked the article, read below to find out how you can support more of my writing. Thank you for reading.