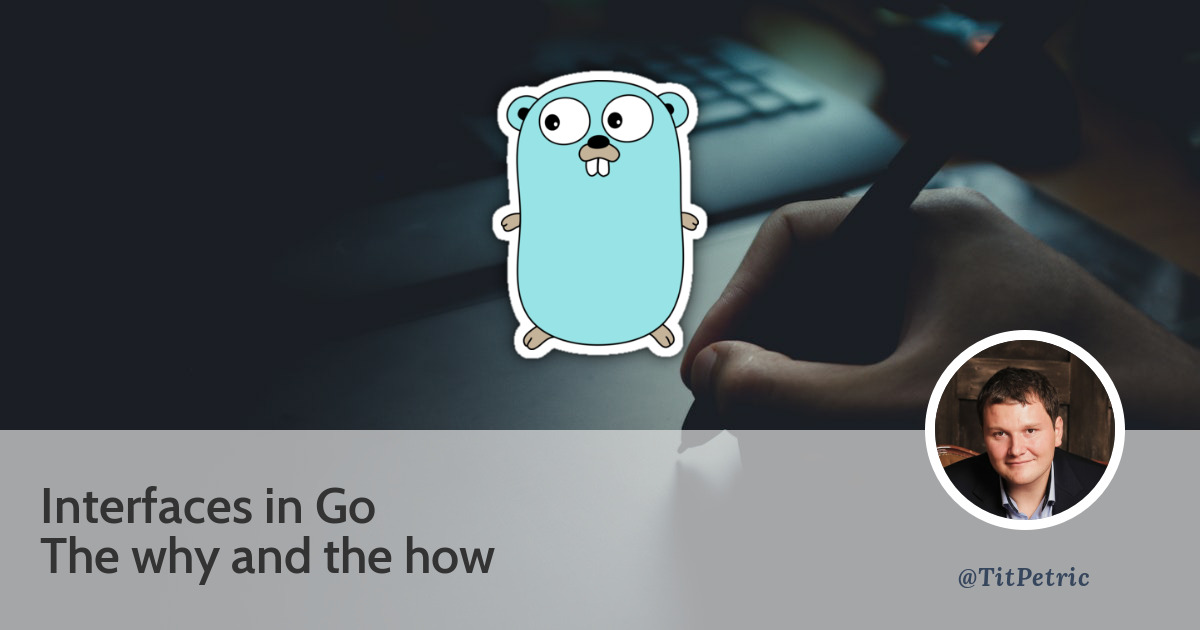 Interfaces in Go are a powerful language construct, which allow you to define and use objects of different types under a common umbrella interface. What does that even mean? Imagine a Car, or a Motorbike. Both have a license plate. When we declare an interface with a License() string function, both Car and Motorbike objects will satisfy this interface.

If you want to run the example, here’s the playground link for it. The output is what you might have expected however:

So far, you’re probablly thinking that you haven’t really heard anything new, or even that the example is useless. You’d be right. While the example does demonstrate a possible use case, it doesn’t really shine a light onto what makes interfaces useful.

What is the problem with interfaces?

If you’ll note, the concrete object receiver functions are pointers. This means that it’s mandatory to pass the Car or MotorBike objects as pointers to PrintLicense;

But the parameter decleration for the argument is v Vehicle and not v *Vehicle. You’d expect you can pass car and use the *Vehicle as the receiver - but it isn’t really so. Vehicle is an interface which can hold a value, by using *Vehicle, you’re declaring a pointer to an interface.

You might be tripping yourself up as to what interfaces here actually are. If you ever wrote PHP, you would have an interface class, which is very similar to Go’s interface decleration:

The difference between PHP and Go however is that in PHP you enforce interface implementation to the class by declaring it like class Template implements iTemplate. In Go, you can use any object as an interface value, as long as it can satisfy the requirements.

A real world example of interface use?

Ok. Let me postulate that you might have several different crypto currency tokens in your possesion. The balance of these wallets may be available on several, different, blockchain explorer websites. For example, if you have some Ethereum (ETH) tokens, your wallet details will be on etherchain, and if you have some Vertcoin (VTC) tokens, your wallet will show up on the vertcoin block explorer. There are several websites with APIs that will give out your wallet balance. You might even be on a crypto currency exchange like Bittrex which will give you several wallet balances based on the tokens that you hold there.

If to limit ourself just to the available public APIs, these two websites for ETH and VTC return significantly different results when it comes to retrieving wallet data. In fact, the vertcoin block explorer doesn’t even return JSON:

Abstracting these into an interface however, is simple enough:

The WalletBalance interface must provide a Name() function that would return a string of the used provider (Bittrex, Vertcoin, Etherscan,…). For each of these, there should be a list of token balances returned. This interface supports exchanges which will hold more than one wallet balance.

When it comes to the actual implementation, the main impact is that main loop where these interfaces would be handled. As you would just provide an object that satisfies the WalletBalance interface, a lot of boilerplate code gets taken out as the result.

This is the example of the main loop, how an implementation could look like. Before refactoring for interfaces, individual cases in the switch statement were significantly duplicated. Depending on what you want to do with []Balance, it’s going to be a lot of code that’s almost the same between individual cases, which was now moved after the switch.

A lot of differences between concrete implementations get abstracted away. For example, the ETH balance is expressed as a fixed point integer. To get the actual ETH balance, you should divide this number:

This is something that is fully abstracted into the Balance() call from the implemented interface. The implementation itself makes sure that the returned values follow a specific structure (ie, Balance). Without interfaces, boilerplate code is written to produce the same result for each type.

In another example, before optimizing it away with interfaces, this was the code to fetch different cryptocurrency mining pool balances:

As you can see, there’s opportunity to de-duplicate some code with the use of interfaces. While the effect with the example seems negligible, you should be aware that if you implement logic for more mining pools, the longer this function will be. If you change the signature of Report func, you’d have to refactor more code instead of just updating a few lines - the interface definition and the invocation of the function.

Interfaces are great for abstracting your functionality. They do however result in one or two rules that will make it easier to use:

The logic behind the rules is as follows: The pointers to interfaces add a useless layer of indirection, that doesn’t give you any benefits. And very rarely do we want to pass a copy of an object to a function. Even if you would pass an object and expect a copy, you would have to think about any pointer or slice members - slices are also pointers, and they would be passed as-is, not copying the underlying data.

Of course, the lines get blurred even more when it comes to passing slices as arguments. The slices are already pointers, and having []Vector or []*Vector would only deal with memory overhead and cause additional indirection. If you have many edge cases where the rules should not apply, you might figure out a way how to namespace your interfaces into their own package. I mean, nothing says interface better than interfaces.Vector, but it might be a bit longer to type out.

By now you know why (in the true spirit of RFCs), I wrote SHOULD and not MUST in the rules above.