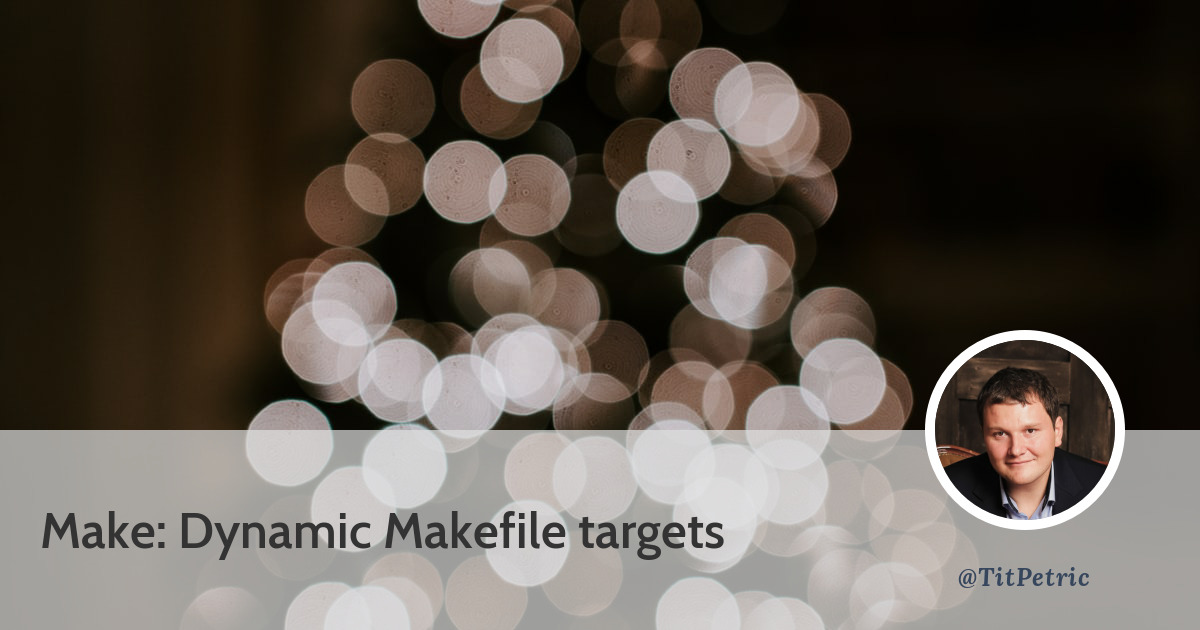 A common pattern which we want to support when building our services is to build everything under rpc/{service}/{service}.proto as well as cmd/* and other locations which may be manually written or generated with various tools.

Go does actually support building the whole cmd/ folder in one command:

This functionality was added in Go just recently, in the 1.13.4 tag.

It will not create the target folder itself, but will build all your applications under it, based on the ./cmd/... argument. Why do we need dynamic Makefile targets? We can live without them for building multiple Go programs, but we don’t only need them for building the cmd/ folder, but for other code generation folders as well.

We could resort to //go:generate tags to invoke our files, but it would again mean some duplication/replication of responsibility. Defining a single dynamic Makefile target keeps all the logic in one place. It also allows you to customize the build steps to target multiple architectures, operating systems, and other use cases.

Let’s learn how dynamic Makefile targets work and try to cover our use cases.

The first target that we want to support is running all code generation required for our RPC services. We define a rpc Makefile target, and use dynamic execution to build a list of dynamic targets:

Here we use the make built-in feature to run a shell, and with the output of that shell command define our dynamic targets. For each folder found under rpc/, a target like rpc.{folder} is created. For example, if we wanted to build the code for a target, we could do:

If we used rpc/stats as the target name, make wouldn’t do anything as that file/folder already exists. This is why we are rewriting the target name to include a . (rpc.stats). The obvious second part of our requirement is to make this target dynamic. We want to build any number of services.

The % target takes any option (which doesn’t include / in the pattern). We can also declare variables like SERVICE for each target. The variable can also be exported into the environment by prefixing it with export (example: rpc.%: export SERVICE=$*). Currently we don’t need this, but we will need it later on to pass build flags for our cmd/ programs.

The $* placeholder is the matched target parameter. As the target is rpc.stats, the variable here will only contain stats but not rpc. since it’s part of the target definition.

With the @ prefix on individual commands in the target, we suppress the output of the command. All we need to do is update the step in .drone.yml into make rpc, and we have support for a dynamic number of services. Running make verifies this:

Building our services from cmd/

For each service, we will create a cmd/{service}/*.go structure, containing at least main.go. Let’s start with adding a simple cmd/stats/main.go with a hello world to greet us. We will come back and scaffold the actual service later.

The function println is a Go built-in function that works without importing any package. It shouldn’t really be used, but as far as providing some test output, it’s the shortest way to do that. We will throw this program away, so don’t pay it much attention.

Using what we learned for dynamic targets with the rpc target, let’s create a build target which will build all the applications we will put under cmd/ by running make build.

For the main build target, we define our build environment variables - we want to build our services for linux, for amd64 architecture, and we want to disable CGO so we have static binaries. We list all cmd locations as dynamic targets and remap them to build.%, similarly to what we do with the rpc target. All that is left to do is to add make build at the end of .drone.yml, and add our /build folder into the .gitignore file for our project.